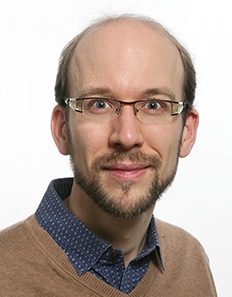 My research revolves around the interplay of strong interactions and topology, which can give rise to collective phases of matter with exciting new properties. Some of the most interesting topological phenomena can be found in two-dimensional quantum systems. A prominent example are fractional quantum Hall phases of electrons in strong magnetic fields, which realise fractionalized quasiparticles that carry fractions of the charge of an electron. More excitingly, they can also carry so-called non-Abelian exchange statistics which allow one to manipulate the many-body quantum state in a well-defined manner through the controlled movement of quasiparticles, providing an ideal platform for quantum computation. In part of my work, I focus on realising these exciting phases in new physical systems such as cold gases. The image illustrates a typical set-up for creating synthetic magnetic fields by light-matter coupling. As a theorist, I am most interested to use such models to explore new types of topological phases such as fractional Chern insulators.

More generally, I investigate new ways of understanding strongly interacting quantum systems accurately using numerical simulations. My approach relies on combining analytical insights into collective properties of emergent phases at low temperatures on one hand, with quantitative modelling techniques for microscopic correlations on the other hand. This combination provides powerful tools which can give insights into a wide range of strongly correlated materials, spanning topics such as correlated superconductors and frustrated magnetism.

Quantum mechanics has allowed physicists for more than 80 years to understand the fundamental components of matter. Yet, it does not follow that everything is understood, and the reason lies in the sheer complexity of nature. The equations describing the movement of more than a few particles are generally too complicated to be solved. In my research, I explore exciting new concepts helping us to discover the rules governing complex systems with many interacting parts.