Prof Mark Warner is a founder and co-director of the Rutherford Physics Partnership, a large Department for Education funded program that brings physics and maths skills to students between the end of GCSE through the AS and A2 years to the start of university. The partnership has produces a problem centered massive online physics course, www.isaacphysics.org with the motto "you work it out".

This video of a chain fountain has been watched at least 4M times, and mystified everyone, including many professional physicists. Why do you get a fountain?

Two members of TCM, Dr John Biggins and Prof Mark Warner, provided a surprising explanation: the fountain forms because the pot pushes upward on the departing chain. This work featured in several media outlets, including Nature,and Science, Scientific American and, yes, the Daily Mail, and the resultant explanatory video (above) has been a You-Tube hit. The fountain also featured in the 2014 Christmas special of QI, and in a segment featuring John Biggins on BBC1's the One Show. A special problem set at www.isaacphysics.org allows students with AS physics knowledge to fully understand, and even predict the height of, the chain fountain.

Two members of TCM, Prof Mark Warner and Dr Anson Cheung , have written "A Cavendish quantum mechanics primer", a short book which takes the reader, initially equipped only with maths from their penultimate school year, to well into the second year quantum mechanics course in physics at Cambridge University. It is not a complete textbook, but is a primer that aims to introduce essential ideas while emphasizing skills and the solving of problems --- much in the style of the Cambridge physics course and, as such, is particularly well suited to school age readers who want a taste of what a degree in physics entails.

National Centre for Universities and Business

Dr Gareth Conduit is a committee member and the University of Cambridge representative on the National Centre for Universities and Business (NCUB), an independent and not-for-profit membership organisation that promotes, develops and supports university-business collaboration across the UK. 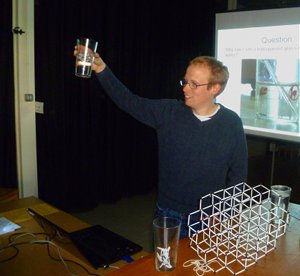 Prof Mark Warner also runs the Cavendish's Senior Physics Challenge, a five day summer residential course for bright AS physics students. The course aims to enthuse potential physics students and demystify, and make more accessible to a wider range of students, the transition from school to university physics in the UK. Over the years many other members of TCM have contributed teaching and IT support to the SPC.

TCM is a regular participant in the Cavendish's physics at work event, a three day gala which aims to enthuse 14-16 year-olds and widen participation in physics. This year we discussed why water falls out of a glass, why you can see a transparent object submerged in water, how you reliably date an old object, and wave-particle duality over 18 talks that, between them, reached an audience of around 400 potential physicists.

The 85 ways to tie a tie is a popular science book by Dr Thomas Fink and Dr Yong Mao that uses knot theory to enumerate all the ways one can plausibly tie a tie. The book stems directly from work the authors did in TCM, although both have now moved on.