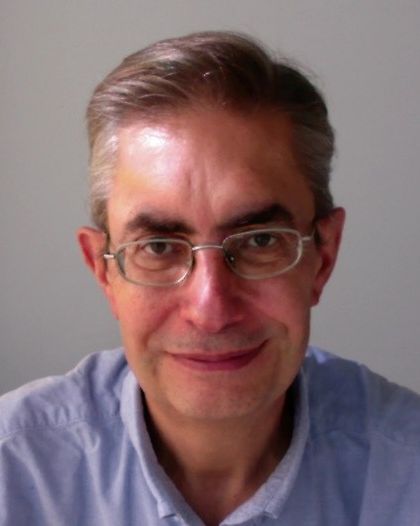 We work within the field of computational and theoretical condensed matter physics, especially (but not exclusively) developing and using first-principles simulation methods. Recent work include the study of nano-confined water in 2D, within a longer line of work in the study of liquid water. The figure shows a proposed phase diagram for water confined to a slab of around 1 nm thickness, showing interesting new proposed phases at high density, including a hexatic phase [J. Zubeltzu et al, Phys. Rev. E (2016)]. This and similar studies are based on molecular dynamics simulations, both from first principles and using empirical potentials. For the former we use the Siesta linear-scaling DFT method, which we developed and maintain in collaboration with other groups.

Another defining research line of the group is the study of non-adiabatic processes in forced electronic systems, mostly as affected by an ion projectile shooting through them, as happens in radiation-damage processes. For this purpose we use real-time time-dependent DFT.

Other topics are researched within the group responding to interesting collaborations with other groups. These include the study of complex and functional oxides and their heterostructures, isotopic fractionation of water in hydrous minerals of interest for Martian geochemistry, the electronic properties of a recent family of superconductors based on bismuth sulphide, and shock waves from first principles.

More details on my background can be found here.

The physics of low-energy matter (of temperatures below a few million degrees centigrade) is extremely well described by considering electrons and atomic nuclei attracting and repelling each other as point charges, and moving about following the laws of quantum mechanics. So far this theory has been systematically proven right. It allows, in principle, the theoretical predition of the properties of any such matter, from materials for batteries or the interior of planets to DNA. The resolution of that theory's equations is of enormous complexity, however, when the system to be studied consists of many particles. A substantial amount of research in the last century has been dedicated to find efficient (albeit approximate) quantum simulation methods, enabling us to predict low-energy-matter properties using computers.

We have contributed to that effort with the development of what is called a linear-scaling density-functional theory method (a very efficient one), called Siesta, and we still work developing new efficient ways of computing properties of interest for systems of interest. The systems that are of interest to us at the moment are varied. They include liquid water confined to nanoscale dimensions (1 nanometer is a millionth of a milimeter), as found in living cells and in rocks of the soil. If normal (not confined) liquid water is already fascinating at the atomic scale, the nanoconfined counterpart is quite astonoshing in its behaviour. It is becoming increasingly clear that its properties are important in the working of the machinery of cells in living beings. We also work on the study of radiation damage in matter, from the materials needed to encapsulate nuclear waste (the one we already have) in a safe way for the required time (around one hundred thousand years), to the effect of radiation on living tissue for the understanding and improvement of ion radiotherapy.