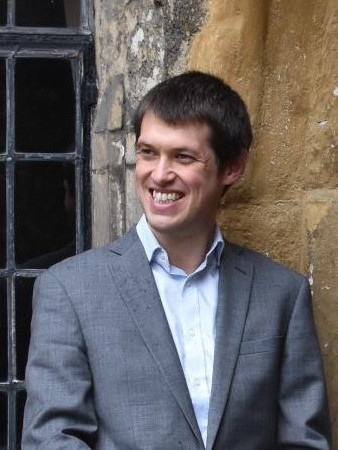 I am now a lecturer in Cambridge University's Engineering Department. I am recruiting PhD students so if you are interested in joining my group, send me an email.

Soft solids can undergo shape changes of several hundred percent. This introduces non-linearities into their description that result from the geometry of large deformations, and hence which are universal to all soft solids. These non-linearities can drive elastic instabilities, resulting in simple loads producing complicated shape changes. I work on the theory of these shape changes. Recent successes have included a description of an elastic instability akin to viscous fingering that occurs when a fluid is pumped into a soft elastic layer in a Hele-Shaw cell, and the description of the pattern sulci form in on the two-dimensional compressed surface of a soft solid.

When we see a complicated shape in biology - for example, the folds of the human brain - we typically think the development must be the result of a carefully regulated chemical process, with a Turing-like reaction diffusion instability at the heart of the pattern generation mechanism. This way of thinking fits easily into a biochemistry mindset dominated by genes and proteins, but sometimes things are simpler. I am interested in examples where the biological growth is very simple but the action of mechanical forces (i.e. elasticity) sculpts the tissue into the observed complex shape. For example, in a recent paper we argue that the folds on the human brain are a simple mechanical consequence of the outside of the brain (the cerebral cortex) growing faster than the inside of the brain, and then being shaped by a sulcus forming compressive elastic instability akin to buckling and wrinkling. An example of the brain-like shapes this mechanism can produce is shown on the right.

I have worked on the theoretical description of liquid crystal rubbers, in particular, on the peculiarly soft response of polydomain nematic rubber, and the microstructures in SmC rubbers.

I also explained the chain fountain.

When an elastic structure is pushed or pulled it responds by changing shape. For example, if you pull on the two ends of an elastic band it gets longer. For small forces the shape changes are typically simple and small, but if you apply enough force the structure sometimes responds by changing shape in dramatic and unexpected ways, forming complicated shapes from simple ones. I discover and describe these shape dramatic changes.

During biological development a basically spherical egg turns into a complex assemblage of complicated shapes known as an organism. I also investigate whether these complicated shapes form via such elasticity. For example, one small part of development is the formation of iconic the folded surface of the brain. I am investigating whether this is simply because the outside of the brain grows faster than the inside, and consequently crumples up.

I also explained the chain fountain.