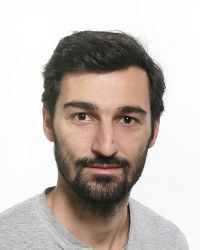 I am currently interested in and working on understanding the dynamics in kinetically constrained systems of quantum particles. Kinetic constraints may arise from interaction-driven correlations or as a result of driving, and are relevant to various physical setups, such as optical lattices.

A related focus of my research is on topologically ordered states. I am particularly interested in instances of topological order that arise due to strong interactions and have no weak-coupling analogues.

Quantum magnets -- especially frustrated ones -- can lead to unconventional correlated states in the above categories and are frequently the launchpad for further study.

My research is funded in part by an ICAM Postdoctoral Fellowship, awarded by the Institute for Complex Adaptive Matter (ICAM).

The physics of solids showcases many fascinating phenomena which, initially, may seem to contradict the current scientific intuition. Many striking properties of materials are manifestations of the underlying quantum nature of the constituent particles, and can be understood by solely taking into account the quantum-mechanical properties of each single particle on its own. Many experimental observations have been understood and exploited using this paradigm. A recent example is furnished by topological states of matter, which have been the motivation behind a large body of experimental and theoretical work.

Technological innovation, however, requires increasingly more advanced engineering. Promising prospects to find the ideal balance between functionality and complexity lie beyond non-interacting electrons, in the realm of interacting particle systems. In this regime, competing tendencies on the microscopic level can lead to a plethora of unexpected phenomena, some of which are already in use in technological applications today. The main goal in this arena is to realize correlated quantum states that are complex enough to facilitate desired functionality, while still being easy to engineer and manipulate.

The search towards the optimal structure for the attainment and exploitation of correlated quantum phases raises fundamental questions, requiring proof-of-principle answers, on how these phases can be favored by material design: Are weak or strong interactions more favorable? Are insulators or semiconductors more suitable? Are itinerant or localized particles a better starting point? In my research, I search for answers to such questions, by envisioning, identifying and understanding novel, strongly correlated states of matter that can arise in certain physical settings.