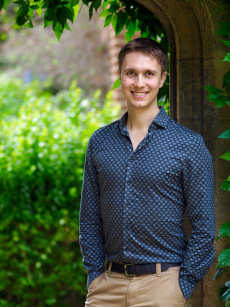 I started my PhD studies at TCM in Dr G Conduit's group in 2017, submitted my thesis in December 2020, and graduated from my degree in September 2021. During my time at TCM, I was working in the fields of quantum physics, statistical mechanics, non-equilibrium physics, collective phenomena, materials design, and neural networks. I have since moved on from TCM and started a post-doc at PIK Potsdam in the field of climate mitigation and energy-systems modelling.

My main interest during my PhD lied in the study of long-lived chirality states in low-temperature strongly coupled Rashba systems (see figure). Based on some exciting experimental results by Dr V Narayan and J Dann, I tried to understand the nature of these states and model the resulting magnetoresistance behaviour for comparison with experimental data. This work has been going on since September 2017, and results have been published in Phys. Rev. B and J. Phy. Cond. Mat.

Moreover, I worked on applying techniques from statistical mechanics and, in particular, methods to explore potential energy landscapes in chemistry to deep artificial neural networks to understand their learning behaviour. This work is in collaboration with Dr Alpha Lee and Prof David Wales. Results have been published in PNAS.

From 2016 till 2018, I was involved in work with Dr G Conduit's in applying machine-learning techniques to large materials databases and used these to make predictions for new materials. This has been highly successful in industrial applications of drug discovery and materials design and has also resulted in a publication in Comp. Mat. Sci.

In a collaboration with Dr L Schonenberg and Dr G Conduit, I worked on the theory of the BEC-BCS cross-over in two-dimensional strongly interacting Fermions, which is investigated with great interest in the cold-atom physics community, where the interactions can be tuned using the Feshbach resonance. In our work, we use Quantum Monte-Carlo simulations to compute a number of properties of the ground-state wave-function for varying effective range, which is a parameter for the interaction potential. An article was published in Phys. Rev. A.

During my Masters studies, I worked with Dr C Castelnovo on a project studying the three-colouring model with colour-dependent interactions. We map out the central charge of the conformal field theory describing the long-wavelength limit of the system for the whole phase diagram from finite-size scaling of the free energy, which can be computed using the transfer-matrix method. The three-colouring model can be used to describe the frustrated ground-states of a 3-state anti-ferromagnetic Potts-model, as well as arrays of Josephson junctions, and networks of superconducting wires on a kagomé lattice. A paper on this work was published in Phys. Rev. B.

Over the course of the last century, scientists have been highly successful in establishing the knowledge and understanding of the fundamental principles governing the behaviour of the world surrounding us in our everyday life -- most prominently electro-magnetism and quantum mechanics. While these frameworks are fairly well understood at the microscopic level, drawing conclusions from these basic theories for more complex systems such as solid-state objects turns out to be anything but simple.

In my PhD, I work on understanding phenomena in the field of solid-state physics and related topics using a broad variety of methods. All the work that I do is either based on pen-and-paper derivations or requires the excessive use of numerical simulations on high-performance computer clusters. My current main research topic deals with systems of broken inversion symmetry and a novel species of long-lived electronic states in those systems. Previously I have worked on materials modelling, which has been successful in the design of materials and drugs. This work is based on techniques using artificial intelligence (i.e. neural networks) to capture correlations between materials properties of known data and to make predictions for unseen data. In another former project, I contributed to theoretical work in cold-atom physics, where atoms are trapped using laser beams and are studied as a toy-model to make predictions for real solids.

Below you will find a list of featured publications I published during my Masters and PhD studies at TCM. You can find a complete list of all my publications on my personal website.