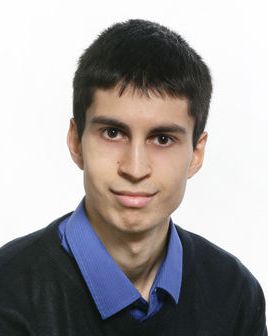 My main interest is currently in strongly correlated quantum many-body systems, with particular regard to the effects of disorder.

Many-body localisation: ﻿I am studying the metallic side of the many-body localisation (MBL) transition. The quantum random energy model, which serves as a mean-field model of MBL, is amenable to an analytical treatment in the weak-disorder regime by means of disorder-averaged perturbation theory. This problem corresponds to a study of the Anderson Hamiltonian on the hypercube (the figure on the right is a representation of the 10-cube). Diagrammatics can be developed in analogy to the single-particle theory of weak localisation.

A metal is a regular arrangement (lattice) of positively charged nuclei surrounded by a sea of negatively charged electrons. They conduct electricity because the electrons behave like waves and pass through the metal almost unimpeded by the nuclei. Real materials are disordered (e.g. lattice imperfections and impurities), causing electron waves to scatter, which gives rise to electrical resistance. However, waves can exhibit interference effects – waves' peaks and troughs cancel out. Sufficiently strong disorder can lead to destructive interference of the scattered waves, resulting in each electron being confined in space (Anderson localisation). In this case, disorder has produced an insulator.

Electrons repel by virtue of their charge. Surprisingly, it is often a good approximation to ignore this, as in the above wave description. In other materials (e.g. nickel oxide), interactions cannot be ignored and this can lead to a lowest energy configuration in which the electrons are localised in space as far apart as possible. This is an interaction-driven mechanism (Mott localisation) by which an insulator can arise.

Interplay between interactions and disorder is non-trivial. Either an insulating (many-body localised) or a metallic state could result, depending on the precise details of this system. Understanding these possibilities, when they occur and the properties of the resultant states, is the concern of the field of many-body localisation . The field is primarily concerned with elucidating fundamental theory, but properties of the many-body localised state could lead to applications, such as in memories for quantum computers.