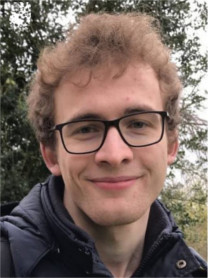 I am interested in the effect of topology in condensed matter physics, and in particular its realization in magnetic systems. Specifically, I work on combining and extending various classification schemes for discovering and categorizing topological effects in electronic and phononic systems.

I have previously worked on superconductivity but am currently mostly interested in weakly interacing theories, e.g. topology in band structures. I also collaborate closely with the DFT community, and am interested in material realizations of topological effects.

I am funded by the Aker Scholarship.

My research deals with the effect of topology in condensed matter physics. So what is topology?

Topology is a branch of mathematics that deals with global structures. Global structures refers to properties that cannot easily change without a dramatic event. They are usually integer-valued, so they only take values like 0,1 or 2 but not 0.41325. The easiest example of this comes from the study of shapes, but topology is a very broad topic which crops up in many different settings.

When studying shapes, one usually thinks about angles, lengths, areas, volumes etc. These are all quantities which can take non-integer values, related to the geometry of the shape. A topologist, on the other hand, may study the number of holes that a shape has. A shape could have 1 or 2 holes, but it cannot have 1.3451 holes. Thus, for a topologist, a coffee cup and a doughnut are the same shape (both having one hole), even though from a geometric perspective they are very different (different angles, different lengths etc.). It is much harder to change the number of holes in a shape from 1 to 2 than it is to slightly change an angle. Therefore, the number of holes of a shape is a much more stable quantity than the exact value of e.g. an angle of our shape. Such stable numbers are called topological invariants.

Physical theories can be quantified in a similar manner. Many physical theories have a component which depend on the local structure (e.g. the exact energy at which we are operating) and a component which depends on the global structure (e.g. how many holes the space our theory is defined on has). I look at the latter aspect in low-energy quantum mechanical theories. I work mostly with finding ways of classifying all possible such structures for different spaces on which the theory is defined. Most of my current work is concerned with the additional structures which arise from taking into account magnetism.

So why is this interesting? It turns out that many novel physical effects can arise by considering topology. Perhaps most exciting is the discovery of materials that conduct electricity (or spin) only on the surface not in the bulk. This is predicted to have many important implications in electric devices of the future. Topology is also expected to play a crucial role in future quantum computers. In 2016, the Nobel Prize in physics was awarded to Thouless, Haldane and Kosterlitz "for theoretical discoveries of topological phase transitions and topological phases of matter."